I'll have to do another post about how I chose the brand of MOST AMERICAN jeans for my wardrobe in another post, but it mostly came down to fit.  Pointer Brands ended up being a little small but overall I like the styling better and they were very, very accommodating when I called about an exchange after the 30 days limit.  I'm getting a jeans jacket instead that the Old Man and I can share and sew patches on it and stuff.

Wearing the jeans to campus today so thought I'd mention my decision and promise to follow up!
Posted by Unknown at 7:43 AM No comments: Links to this post

That title is a little misleading -- I mean, there are a couple of projects right now that are pushing the idea, reasonably and intuitively, that organic gardening is actually better for the environment and more productive crop-wise than industrial farming.  The first example comes from a Grist article by Tom Philpott (a solid journalist who echoes a lot of the issues I like to think about) reporting on new findings from the test plots at Rodale Institute.  Here is a pullout from the article:


As the globe warms up, increased droughts are likely to reduce global crop yields. The ag-biotech industry is scrambling to come out with "drought-resistant" GMO crops. But organic ag might already have that covered: "In 4 out of 5 years of moderate drought, the organic systems had significantly higher corn yields (31 percent higher) than the conventional system."

This just makes sense and it's something you learn in environmentalism 101:  Plants that aren't protected by chemical pesticides/herbicides are more resistant to bugs, because they are naturally resistant!.  They're not going to be completely bullet-proof, but this just comes down our personal ick-factor when it comes to finding bugs in our fruit and vegetables.

For instance, it's really gross when you find worms when you husk farm-fresh corn, but as my mom-in-law says, "that probably means they didn't use pesticide."  So, that's a plus, right?!  The hard part is finding the will to get out a big ol' knife and cut those wormy parts of the corn off, and then have the selective amnesia to forget the worms were on that corn after you've cooked and served it to the fams.

Another way of thinking helps out here - one of my first kitchen jobs in a restaurant was a place where the line cooks worked so fast that sometimes a burger went flying to the floor.  Two things applied to this situation:
Does that make you never want to eat in a restaurant again?  Of course not!  So, why is cutting off the wormy parts of fresh corn any different?  Like I said, it goes to our ick-factor for things we are not familiar with, like produce that does not come cradled in a styrofoam platter and wrapped in plastic.

Anyway, the other thing I wanted to post was on BBC International about Environmental Agriculture in...South America I want to say, but I cannot find a reference to the story anywhere.  Folks are playing with old methods of sustainable farming and rediscovering what should be intuitively true to us: organic, non-chemical farming is the just as, if not more, productive than the methods we've come up with in the last 100 years.

Illustration from my personal collection (Good Earth Almanac, by Mark Gregory); I'll spend another post ranting about how formative this book was to my childhood.
Posted by Unknown at 8:38 AM No comments: Links to this post

Okay, here is the smart glove, my new work gloves.  Got the idea from a book called Switch Craft.  You have to use metallic conductive thread which I found on Sparkfun Electronics for 19.95 + shipping.  I even made a video to go along with this post, my first, so you can see how it works.  Then I planted my two new banana babies that I got in the mail yesterday.  They're Ice Cream banana trees, and I'll be planting these two by the air conditioner (my friend Bren told me a long time ago that planting bananas over your air conditioner is a classic Florida way to keep your air conditioner shaded in the summer) - it apparently saves electricity or keeps the air conditioner unit from frying, something like that.
Actually, it's kind of chilly today so I need gloves!  Perfect timing.   This is probably going to be my big Christmas gift this year since I've got a ton of thread, now.  The next pair will probably be some work gloves I make out of my old jeans, the ones that ripped on me 10 minutes before class the other day.  But that'll have to wait a bit.  My thesis?  Oh yeah, I got to finish that today...
Posted by Unknown at 10:39 AM No comments: Links to this post 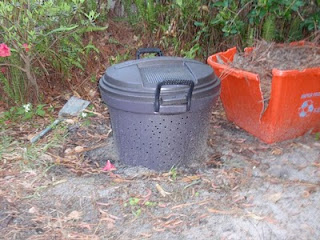 So, I reported on my first compost bin a while back (most pertinent posts are here and here) - it cost about 10-bucks at the Walmart because it was a cheap trash can with a locking lid that I drilled a bazillion holes in, cut off the bottom, and stuck it about 6-inches in the ground.  Last year we had to move it to make way for a second raised-bed garden plot, and the Old Man was able to find a new place for the compost bin.  So, after a respite of about 6-months, I've started composting again. 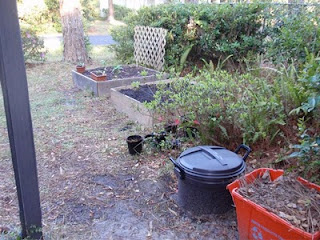 Now, it's become apparent that you need at least TWO of these 10-dollar compost bins in order to be successful in your composting.  Also, some sort of implement to churn the compost in situ would help.  But, anyway, so I need another bin.  That's my next project - I'm not able to do anything right now but hopefully by this weekend I can get started on a new one.
Posted by Unknown at 8:09 AM 2 comments: Links to this post