More about Rewards with Greenopolis and RecycleBank

So while on vacation I went to the Ripley's Believe it or Not museum in St. Augustine for the sole purpose of recycling a butt-load of cans and bottles at the Promise of Pepsico's Dream Machine. We collected a bunch of recyclables over the course of our vacation and I discovered this machine when we went on the Ripley's Ghost Tour (which is truly creepy and you should go if you get the chance). Anyway, recycling through this method has been like a game – well, actually, it is a game. Every time I recycle a can or bottle in the Dream Machine I get rewarded with 5 points – right now I've got 160 points. That's not all from recycling, mind you – through RecycleBank and Greenopolis, I've also played a recycling game, pledged to take shorter showers (i've gone on rants about this before – see here) and I've used their iphone app, RecyclePix. With Recylepix I take a picture of a can or bottle that I'm considering recycling and then post it on the Greenopolis website, where it gets sucked into a vortex of environmental action, never to be seen again. I guess. I don't know, because I haven't seen any of the pictures I've posted – I get points for posting the pictures and then extra points for putting a caption on the photo, and then extra points if I post it on Facebook or Twitter. I don't do the social networking thing for something like RecyclePix, but you can friend the AE on Facebook or follow me on Twitter, if you are so inclined.
I guess I'm wary about posting to FB and Twitter with this stuff because in a really big way this all seems really vapid, and it's giving greater glory to Pepsico and WM, who sponsor the Dream Machine. On the other hand, the idea of rewarding people for environmental behaviors is appealing to me. The dream Machine is actually a good cause not just because of the environmental aspect but also because it benefits a veterans group. I hate to say it, but this might be the only way to get people to think about responsible environmental behaviors, the carrot and stick strategies of rewards and benefits.
Speaking of benefits, I'm going to check and see what 160 points gets me, rewards-wise!
Back. Well, I don't know what kind of rewards I get because there's no place to check. There is a rewards site, but it just tells you about all the cool things you can get, without actually telling you what they are. WHAT WAS THE POINT?! Also, even though Greenopolis is partnered with RecycleBank, my points on Greenopolis are separate from RecycleBank. I would have probably about 200 or 300 points if the accounts were connected. If I can find my Greenopolis pictures I'll post them.
Posted by Unknown at 11:36 AM No comments: Links to this post

Going to recycle at ripley's believe it or not museum! 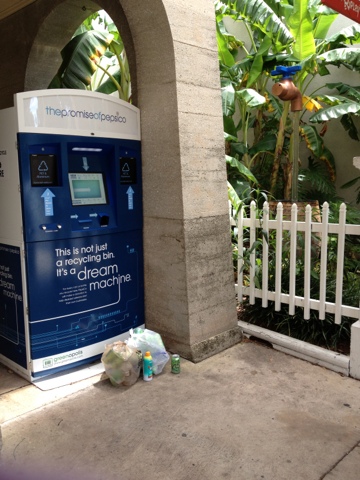 Posted by Unknown at 12:03 PM 2 comments: Links to this post

Recyclebank and the lure of game points

So I signed up
With Recyclebank last night/this morning while trying to figure out how to fix a video on the blog where I demonstrate recycling with PepsiCo's Dream Machine - it was highly successful so now I'm thinking about the idea of getting people to be more environmental by rewarding environmental behavior. Must ponder this more while I contemplate getting out of my chair to recycle this bottle. 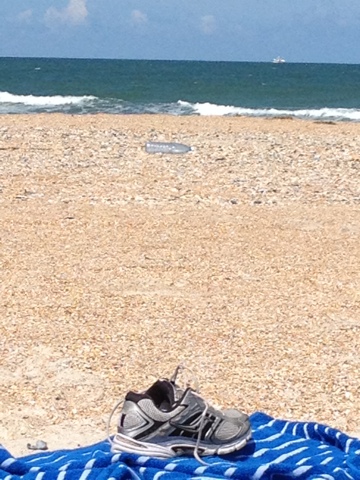 Posted by Unknown at 3:52 PM No comments: Links to this post

Environmental packaging on the beach 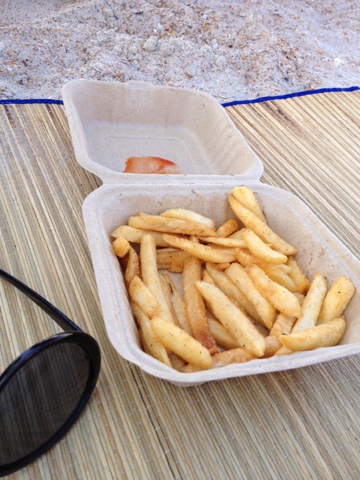 Posted by Unknown at 3:30 PM 2 comments: Links to this post

The Promise of Pepsico (video)

Ran into Pepsico's Dream Machine at Ripley's Believe It Or Not Museum while on vacay with the fams - of course I had to sign up for it so I could get yet another key fob that will fall apart but it's all good!  The Dream Machine is part of "The Promise of Pepsico" which sounds like something you would experience at Epcot but here it was, right in the center of St. Augustine, The Oldest City™and also at the very strange but oddly compelling Ripley's Museum.  So of course I enlisted the Old Man to shoot video on the iPhone of me using the machine for the first time to recycle a couple of bottles; in return for this action I got 10 points which I can supposedly use for goods and stuff - hey, I would be happy if it would entitle me to a Pepsi t-shirt, but they've got big plans for my points, oh yes.  I think they've got a relationship with the Entertainment coupon book and Fandango, but in any case I need 100 points to even do anything redeeming-wise.

Anyway, here's the video so crappy audio and all, it's all yours!