Save the Disney Oceans! 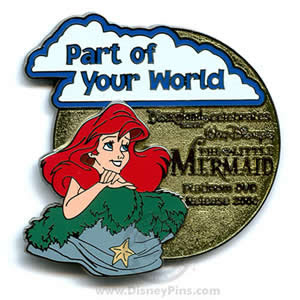 DJ and I were watching Liberty's Kids on the pass-through digital station that we suddenly now get on our no-cable, analogue broadcast set this morning and saw a PSA for the Keep Oceans Clean Campaign, featuring Disney's beloved animated version of the Little Mermaid. It features the full Little Mermaid cast and has the (albeit) subtle connotation that we should not dump crap into our water. But who are we saving here? You know, in the Disney ocean it's not all talking crabs and benevolent sea gods, there's some mean fish out there. And they want revenge.
Posted by Mistressmybae at 8:10 AM No comments:

Cyclists Rise Up Against 4-wheeled tyrrany

DJ and I have been watching a lot of 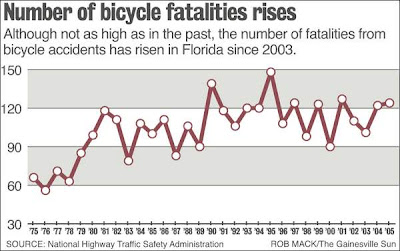 Liberty's Kids on DVD and have been walking around in a sort of patriotic haze for the last few days (sort of the way I get after going to the Hall of Presidents at Disney). Anyway, this got me thinking about the problems cyclists, especially in our medium-sized southern city which boasts a large state university, have on the road.
Above you will notice the number of bicycle fatalities in Florida. Now, Florida is not a bastion of bicycle friendliness, even though our particular city within Florida is designated as a "Bicycle Friendly Community."
Our city's newspaper continues to be a recurring battleground between cars and bikes. Mostly, the arguments that one reads in the "Letters to the Editor" page are rants from motorists about how unfair it is that they have to pay taxes for bike lanes, or why can't cyclists stay out of the street and ride on the sidewalk? The biggest excuse for shoddy driving is that cyclists don't always obey laws and are a danger to themselves. If cyclists aren't menacing cars, they're menacing pedestrians, is that it? My position has always been when I'm in a car I am in a big, heavy, hunk of metal that just about crushes anything it comes in contact with, including people. Because I am in the larger conveyance I prefer to be extra cautious and give the right of way to pedestrians and cyclists.
Okay, before I continue ranting my head off I just want to share an idea which is both annoying and ingenious to me. It is called Critical Mass, and its founding principle is "imagine a world without cars." In our town they have rides at the end of every month. People gather in one spot and at a designated time they all ride off together en masse and essentially block traffic. It sounds really annoying but the goal is to point out that cyclists have as much right to the road as motorists.
As I finish this post, another cyclist has been memorialized for being killed by a car and its driver. 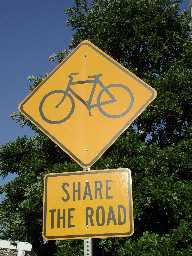 Posted by Mistressmybae at 11:31 AM No comments: 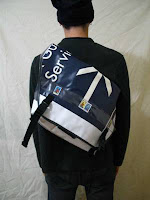 Here is a blogspot blog that has a cool post about using an old banner to make a messenger bag using the golden ratio in the design. I'm not sure what's the cooler concept, here. Scroll down to the bottom of the post and there are also good links about messenger bags and other DIY bicycle-related accessories.
Photo swiped from eeio.blogspot.com
Posted by Mistressmybae at 9:03 AM No comments:

Dang it -- me and DJ have started going to pool again and I washed my bathing suit for the first time after being in the sock drawer all winter. When it was dry I was about to put it in the swim bag when I noticed that it is falling apart. It has a hole, and is getting that white-hair stubble from the old elastics in the fabric. Oh, and a bunch of thread-bare spots. I was first like, "why is this happening?" and then I realized my suit is 16 YEARS OLD! And the sad thing? My body shape hasn't changed for the better in all that time.

So, we're about to leave to get the Old Man a new suit and me a new bathing suit (he's eyeing a sexy little RL number). I've already gone to the evil MalWart and Targete with no success (DJ did get a cool toy out of the ordeal, however). Now I'm off to the mall.

Update: We got back in the early afternoon -- I was completely exhausted from that place -- I hate the mall!!! Went into the first store I came to (Penney's) and got a hideous Delta Burke creation, but it has a skirt and will be functional for the summer. I'm still going to make a suit, though, just to assuage the guilt from buying a bathing suit probably produced in a sweat shop somewhere in Asia (I'm even too guilty to look at the tag). I noted that my old suit was union made.
Posted by Mistressmybae at 8:23 AM No comments: