I can't believe it's taken me until Tuesday to try the ginger beer.  I completely forgot to try it on Sunday, when it was at the two-week mark, and remembered to put a couple of bottles in the fridge last night before bed.

I couldn't wait any longer so I popped one of the mason jars open and put some in a fruit jar (The only clear glasses I have).  I figured I could drive myself to the urgent care if I got really sick.

Promise that I'll put up a picture as soon as I can of the first glass. It is fizzier than I expected.

Taste:  It is like no ginger beer I have every tasted, and not in a completely good way.  It is insanely intense ginger-wise, which I do like; however, it has absolutely no sweetness to it at all.  As I've said earlier, I like an intense ginger beer that is not too sweet; this is not sweet at all and way, way gingery.  I actually had to put some sugar in it.

Reaction:  I am feeling a little light-headed and I'm beginning to suspect that the ginger beer is slightly alcoholic.

Will update later after the old man gives it a try.

UPDATE:  The old man and I finally got a chance to have a ginger-beer tasting after DJ had gone to bed.  He thought it was really intense but very good and suggested I make another batch and take notes to make sure I can start being consistent with the recipe.   His remark about the taste was, "it is definitely a sipping ginger-beer."  The old man, however, did not think that it was alcoholic.
Posted by Unknown at 9:27 AM 2 comments: Links to this post

It has been a seriously long time since I've updated on the project; mostly because I'm lazy and it's been so dang hot I haven't take pictures or done much observing; I get my usual chickens from Laughing Chicken Farm and some danii from the Flour Pot booth and then high-tail it back to the car and wait for DG to finish her shopping. 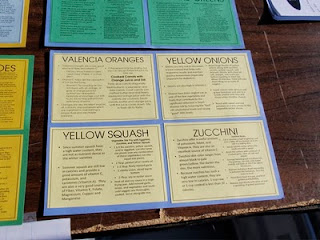 There was a woman doing this project as part of a project for her degree -- nutritional science?  I am such a bad citizen journalist -- I didn't get her name or remember her project dealie.  Serves me right for waiting a month to post this.  She had all sorts of great, simple recipes you could make with all of the crazy amounts of produce that were flying around the market; I got a pretty blue card that had a recipe for sauteed bok choy with rice and egg.  It was pretty yummy! (UPDATE: I changed this paragraph around so I could take out the photo of woman because I was told that this was not a cool thing to do because of privacy blahblahblah - I get it!  I changed it okay?!)

Since then, the number of booths has been dwindling as well as the number of shoppers.  And then number of bags being taken has decreased proportionately.  You know how many bags I put out this past Saturday?  Four.  Why?  Because I was late and now that Erika of the citrus and her dad have packed it up for the season, there is no one available to take bags off the fence.  I'm not sure what we're going to do for the rest of the season; I'm thinking because neither DG or I are going to want to make two trips to the market, we'll probably just leave a few outside and let the elements take them.  I don't know, though, we'll have to think about this.

Finally, here's a bag that we've had for so long and has been recycled through the project so many times that it still has the adhesive gunk on the front from when we were still ironing on the labels.  We have finally settled on stapling them on as it is way faster -- thanks to Jackie for the idea! 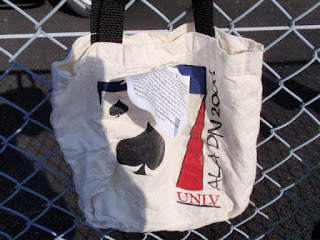 So, the upshot of it all is that it is really, really hot, there are fewer booths at the market, fewer customers, and less bags being taken.  We are officially in the building stock phase of the project, getting ready for next season.
Posted by Unknown at 10:29 AM No comments: Links to this post

Okay, I know I said I was going to update on Need-a-Bag? and I WILL STOP BUGGING ME 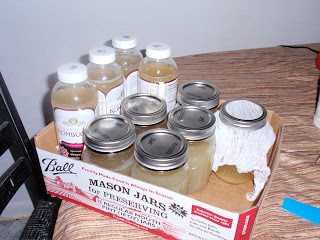 I tried boiling the Kombucha bottles with the caps, but the caps got all warped so I had to hand-wash (thoroughly) four of the unboiled ones in order to cap the four bottles of those.  Then I used mason jars for the rest; the one with the cheese cloth is the new starter batch.  Then I put the whole mess into the workshop where it will sit for two weeks.  Hopefully, they'll go through the process without exploding and/or becoming toxic.  I'll have to be the test subject so I'm picking a time when the family is awake and able to take me to the emergency room if need be.  Haha, only half-joking!

Got the recipe, by the way, from the book Wild Fermentation, and uses no added yeast.

Checked on them yesterday evening, and they were already bubbling away; this morning I checked again and the bubbling was more subdued (it was relatively cool in the workshop) and there was a lot of sediment on the bottom.  Before bottling, I strained the ginger through a piece of unbleached muslin and used filtered water.
Posted by Unknown at 10:05 AM 2 comments: Links to this post