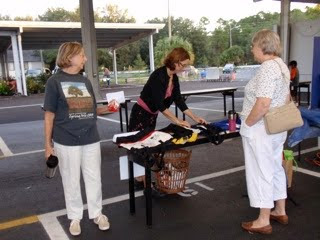 Gosh, has it really been two years since the Need-a-Bag? Project first launched at the Sustainability Festival at the 441 farmers market? The first year we had a table (once again I'll link to the awful debacle of DG and I stealing the Slow Food Gainesvill 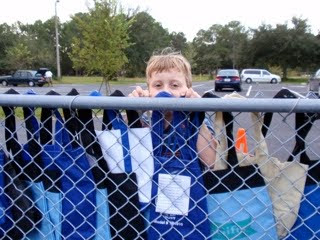 e table), the next year we didn't,
but this year we had a table again!

This year's festival was on October 24, 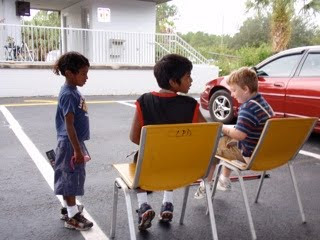 and I decided to do a little photo gallery of our presence at the festival this year.

The first picture is of DG and her mom setting up the table -- DG had gotten a huge number of bags for the thing. DG made a sign thanking our many, many anonymous donors -- we're still having a thank you brunch, but it will probably happen after the holidays!

DJ (short for "Dude Junior" and not to be mistaken for "DG") came along to help and did a fine job carting bags over to the fence to hang them for the shoppers. He has been a good helper over the past year, and next year he'll probably come more often, as he managed to make some friends with some of the farmer's kids who were there. They ended up on the stage with the nice lady (whose name escapes me at the moment) who was entertaining the festival attendees. There was a fellow who was walking around in a pair of camo overeralls and flip flops and pretty much nothing else -- we guessed he was also going "commando." I don't know why I'm including this photo other than to say that hippie culture in 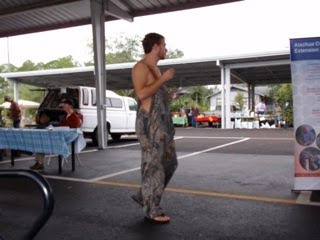 Gainesville is not dead.

It was busy but not as busy if it had been on the weekend when the farmers start bringing in the fall harvests -- it was still pretty lively, and people from Gainesville Regional Utilities and Florida Organic Growers were there (I'll have to post on FOG soon because they are doing awesome work bringing low-cost raised beds gardens to low-income residents).
Posted by Unknown at 11:39 PM 1 comment: Links to this post