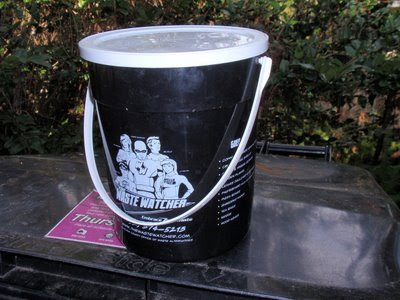 I've been having issues with my compost, lately. Like, mostly that I have been completely ignoring it. I wish I had a picture of the compost container that I kept in my kitchen but refused to dump; it sat sealed on the counter next to the sink, becoming a scientific experiment in anaerobic decomposition of food scraps. Finally, the old man put it out in the carport, where it was conveniently forgotten for another two months (I think by that time it had been sitting on the counter for about two months).

In the meanwhile, while swearing to never open that container and just let it go, I was given another compost container at the Sustainability Fest at the Hwy 441 farmer's market a couple of months ago. It's pretty awesome -- it's a small, black bucket with lid and handy handle for skipping with it to the compost bin (see photo). And I vowed to make good on my commitment to composting by emptying this one out more often. And I've been fairly good about that.

In fact, I just dumped BOTH containers in the compost bin mere moments ago. What?! you gasp, BOTH containers? Yes. And the four-month sealed container was as awful and disgusting as I had imagined, and more so. But I did it -- the stink from the container was too strange to describe -- I think maybe the smell of soil from the Graveyard of the Damned would be an apt comparison. And really old, smelly socks.

Man, I hope I didn't kill the compost with that crud. Also spoke with Sharon the other night who is an awesome composter (she keeps her compost bin in the freezer) and said I should be wetting my compost down more. I think I understood this intuitively but kind of hoped the measly rainfall we've had would compensate. So, after I'm over the revulsion of emptying out The Forgotten Compost Container I'll go back outside and wet it down some.
Posted by Mistressmybae at 12:17 PM No comments:

Posted by Mistressmybae at 10:38 PM No comments:

My friend, Bren, the hostess with the mostess of her blog Gee-ville Deals, sent me an early Christmas present with a link to a blog post about the possibilities of using the dead as food to power electronics. After doing some minor follow up on the internets it became clear that this is performance art, but with scientific fact mixed-in.
An interview with one of the Afterlife project researchers, James Auger, on We Make Money Not Art, is a great display of all of his projects and I encourage people to read it. My favorites are Augmented Animals and the Audio Tooth Implant, apparently much-talked on the web. I seem to remember an episode of "I Dream of Jeannie" that had the same dilemma of Major Healey having a tooth that picked up radio signals. The Afterlife Project is defined as thus:

Afterlife, an aid for the grieving process in a technologically mediated culture. It used to be featured on our website but after we came clean about the tooth implant we didn't want people to think that this project was of the same nature. We're collaborating with scientists and attempting to offer the service for real. Basically creating a microbial battery from the energy of a loved one that may then be used to power a range of electronic products.

This has Adbusters written all over it, but it was enticing enough for me to do some further digging on microbial batteries, and these are apparently already in use. Bestview blogspot blog has a summary of research done at UMass on a microbial battery that generates electricity from organic matter using bacterium called Rhodoferax ferrireducens. These "iron breathers" were placed in an enclosed container with a sugar solution and graphite and deposited protons which turned into current on the exposed end of the electrode. Funded by the Defense Department (of course), the applications include use as a way to generate electricity for low-power antennaes in areas where electricity might not be readily available. I like how Dr. Best, the author of Bestview, makes the distinction between the microbial battery and ethanol, stating, "instead of using organic matter to make a fuel, the battery...converts organic matter directly into electricity." This seems to take a step or two out of the costly and resource conuming process currently used to make ethanol.

The next hit on good old Google was a How Stuff Works article on the "Beer battery." Foster's brewery in Australia installed technology to use microbial batteries to generate a small amount of electricity and clean waste water. In the US, the New Belgium brewery in Colorado has been using this technology in addition to other green technologies in its brewing:

While the brewery uses wind power for most of its power needs (about 85 percent), the methane gas from the waste-water clean-up kicks in the remaining 15 percent.

And the HSW article says the brewery saves 3k on its monthly energy bills. Fascinating stuff.
Posted by Mistressmybae at 9:15 PM 1 comment:

Got electronic proofs of my grad photos -- here I am shaking hands with Bernie, looking all dopey and starry-eyed.  Bernie's all looking dazed at having to shake 500+ graduate hands.  We should have rushed the stage at the end with a cooler of Purell to dump on his head.
I'm done!  Woo!
Posted by Mistressmybae at 10:23 PM No comments:

If you follow the blog regularly, you're aware that I've been finishing up my bachelor's degree in English (haha, I know this blog is probably an editor's nightmare, but that's how I roll, see?).  Commencement is this Saturday and, by gum, I'll be there with family in tow (DG included).  I'm hoping I can get a bunch of new bags Bedazzled and ready to go for DG to hang up, but I'm not counting on it, unless I can get DJ (not to be confused with DG) to help me in this task.  So, this coming Saturday may or may not be bagless.  That is all.
Posted by Mistressmybae at 9:52 PM 5 comments:

Sorry, I had to highlight this fabulous blog, Copenhagenize: Life in the World's Cycling Capital.  If you care about promoting cycling as a way to decrease carbon emissions, please show Copenhagenize some link love in your own blog.

The most recent post highlights a series of posters on ReadyMade.com, that re-envisions what the poster artists of the first Great Depression (read the Copenhagenize blog post for more info), would do today.  Clicking on the ReadyMade link will allow you to download all five posters -- they're totally hot!
Okay, for real, I'm getting back to work...
Poster, Simplicity is the Key to Successful Living, by Nick Dewar.
Posted by Mistressmybae at 12:31 PM No comments:

It was dang cold at the farmer's market this morning and didn't have any bags -- I had washed some the night before but did not have the chance to Bedazzle the labels on, so we made do with the ones we had. I also noticed that the remodeled laundry bag DG talks about in her dispatch from last week, was gone today! Bought some oranges from the lovely Erika-of-the-sweet-and-tasty-citrus who is back at the market with her dad and "reporting for duty" as Need-a-Bag? Project Associate for the duration of the season. Welcome back, Erika! I was about to get scurvy from lack of citrus.
Poor Jared, the intrepid farmer's market manager, had to take the bags down two weeks in a row because I forgot to tell him Need-a-Bag? Project Associate, Stace, had resigned from her seasonal post -- I also forgot to come by myself to remove the bags...! Darn. We need to knit him a hat, or something equally as fabulous for his taking on duties that were not his responsibility.
About Stace: She did an amazing job picking up the bag putting-awaying duties while Erika was taking a break between growing seasons. Stace is now taking a much-needed break as she and her husband, T-dawg, prepare for the onslaught of the Christmas holidays. And the bags that she and her mom collected for the project will be hanging on the fence next week for sure! Thank you so much, Stace, for all your efforts!
Speaking of thanking people and knitting them fabulous hats (the latter which, unfortunately, will probably not occur in this lifetime), I would like to take a moment to tentatively announce the Need-a-Bag Project's First Anniversary Celebration is almost a go! I say "tentatively" because we still need to hear back from one of our associates about their availability. Two months later than our actual anniversary but it will still be a fun evening of pizza, cake, and surprises!!! The manager of The Original Pizza Palace has kindly offered the back room for the affair--thank you, and sorry you guys are having such chaos, looking at the linked Sun article.
Got the pic of former owner of OPP, Jim Larsen, in front of the original Original Pizza Palace, from the Gainesville Magazine article, "Remembrances of Restaurants Past." Photo by Aaron Daye.
Posted by Mistressmybae at 11:23 AM No comments: