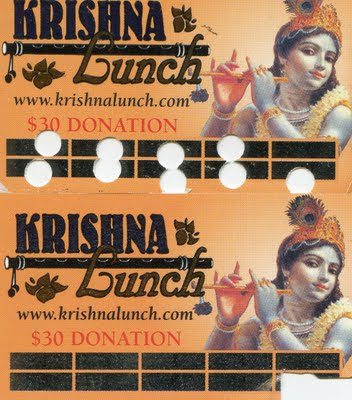 I've got a vegetarian bone to pick with the Krishnas who serve lunch on the University of Florida Plaza of the Americas. I have recounted my various positive and negative encounters with the Gainesville Krishnas in the past, but this one's got my karma-ridden blood up. Am I ready to throw down with the Krishna clan? Maybe.

I was all excited when I got to grad school because I was sooo close now to having Krishna lunches; at my old job at the law library it was too far away to even consider a leisurely Krishna lunch on the plaza. Now all my daily journeys take me within spitting distance of the Krishna lunch. So, the other day I decided to get a 30-dollar lunch card. As you can see from the above photograph, the top card is my old lunch card, with one precious lunch left. But look at the bottom, new card! They cut out the 10th lunch! Now I only have 9 lunches for my hard-earned 30-dollar donation! Okay, they jacked the price up to 4-dollars for the individual lunches so that makes my savings....lets me get the calculator here....so I'm only saving about 67-cents per meal, so my total savings is...6-dollars? Really? Hmm, maybe it's not so bad, after all.
Posted by Unknown at 7:33 PM 3 comments: Links to this post

So, I bought this humongous barrel of Charlie's Soap, and I'm about 2/3 of the way through, now. I'll probably use it all up in a year, so I think the 100 and something-odd dollars I paid for it (with free shipping) was well worth it. I started using fragrance oils to add a little scent to the clothes, and have not had any ill effects on the clothes. It also allows me to get rid of fragrance oils I bought for home-made bath products that I ended up not liking, so right now I'm using "Apple Jack and Orange Peel." While I didn't like it in soaps or lotions, it is working just fine as a laundry scent enhancer.
Posted by Unknown at 11:32 PM 3 comments: Links to this post

I was at the Super Walmart by my house (yes, I know) getting a ton of play-doh for an activity for the technical communications class I'm teaching this semester, and as I was leaving I stopped by the greeter to show her my receipt, which I've gotten into the habit of doing when I bring reusable shopping bags. I've gotten stopped at the door because the bags are opaque so I guess they feel hinky about letting me leave if they can't see the contents. After looking at my receipt the woman admired my bag -- it was from Ward's Supermarket. Ward's has probably the biggest reusable polyprop bags in town; they cost something like 2.49US but they are HUGE.

After telling her where she could get the bags, she asked, "What do you think about the 5-cent charge for plastic bags?" I was nonplussed, as this was the first I had heard about it. I asked her, "In Gainesville?" and she replied, "Everywhere, starting January 1st, 2010."

I didn't say whether or not I liked the idea (which I did, natch) but I said, "well, in Dublin they've been doing that for a few years, now, and they cost 9-cents there, so 5-cents is a pretty good deal." I walked out, thinking "how come I didn't know about this?"

So, as soon as I got home I started investigating. This is not law, yet. It's something Senator Jim Moran of Virginia proposed in April of this year, called the Plastic Bag Reduction Act of 2009. As of right now, H.R. 2091, as it is affectionately known, is still in committee.

4/23/2009--Introduced.
Plastic Bag Reduction Act of 2009 - Amends the Internal Revenue Code to require retailers to pay an excise tax on single-use carryout bags. Allows refunds of such tax for retailers who have a program for recycling such bags. Establishes in the Treasury the Single-Use Carryout Bag Trust Fund to hold tax revenues generated by this Act. Directs the Secretary of the Treasury to make payments from such Trust Fund into the land and water conservation fund provided for in the Land and Water Conservation Fund Act of 1965. Directs the Comptroller General to study and report to Congress on the effectiveness of this Act in reducing the use of single-use carryout bags.