I'm sitting upright for the first time in almost a week -- I've had ongoing low back pain for over 14 years but really did something weird to it and my doctor thinks it's a herniated disc. So, I've been taking stock of what's going to happen in the next couple of months. I've basically dropped out of my life for an entire week, and now will be spending the rest of the semester catching up and putting out the little fires here and there. As a result, my posting on AE will be more sporadic for the next couple of months. It's tough to gauge if anyone is reading AE on a regular basis, but a sense of duty to whatever readers, real or imagined, provokes me to write an explanation for any prolonged absences that occur. Believe me, folks, I'm obsessed with this blog and it will be hard not to post on it.
Posted by Mistressmybae at 1:37 PM No comments:

dematerializing: Taming the Power of Possessions, by Jane Hammerslough, is a great book for a real fundamental look at our consumer culture. It's easy to read (to skim, esp., which is mostly what I did), and has a lot of depth. These books are hard for me to read -- I don't want to be told that I'm no longer a person but a consumer, especially in the eyes of the coroporations who plague me with adverts everywhere I look. But Hammerslough takes a very plain-spoken, realistic tack:

"A lot has been said about the evils of advertising and its supposedly subliminal messages that glorify greed and violence and promise everything from fabulous sex to stellar athletic performance...Been there, done that. The bottom line is this: Like it or not, it's still part of the scenery."

In an essential way, dematerializing is trying to help us gain that ground again, to begin the untangling of ourselves from the imagery that we are presented with in advertising and media, and the true reality of our lives. Before I get too Matrix-y on this, let me suggest that it is important to read books like dematerializing to shake us up and make us think. We don't need the mental shock treatments of Adbusters to rouse us from our collective somnolence, but we do need to occasionally poke our heads up and take stock of what we're doing, living, and buying, and why.
Posted by Mistressmybae at 1:04 PM 1 comment: 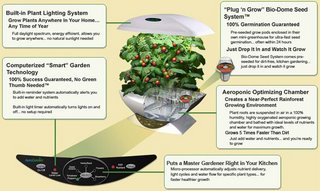 This thing is blowin' my mind and for so, so many reasons. I saw this infomercial this morning -- now, mind you, I hate (let me make that clearer--hate) infomercials with a white-hot passion and think they are the scourge of broadcast television (I don't have cable and don't know what kind of stuff besides QVC is on the cable networks). But, as I was on my way to PBS Kids I ran across this infomercial about the Aerogarden, a totally desk-top hydroponics system, using technology developed at NASA. NASA! Using the Aerogarden, you can grow herbs, lettuce, and tomatoes. I couldn't believe it. It's about $150 bucks but I really have no intention of buying one, anyway. I'm just absolutely enchanted with the possibilities of this thing. Okay, all you 4:20-meisters, I know what you're thinking! And believe me, if I were someone who did any illegal substances I would be eyeing it in that way. This is something that's going to be popular with people who live in apartments and don' t have access to a community garden.
Posted by Mistressmybae at 10:23 AM No comments:

Here is some paper recycling minutae from the inside of a Traditional Medicinals teabox:

Posted by Mistressmybae at 1:16 PM No comments: 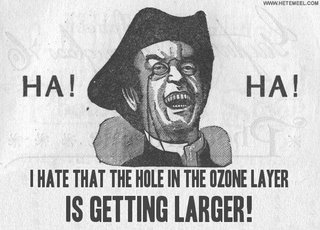 Posted by Mistressmybae at 8:53 PM No comments: 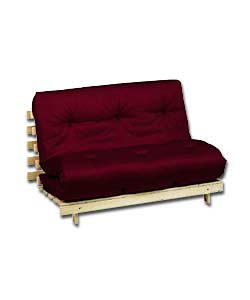 Now I'll finally know if the cheap-ass futon I bought on 23rd Street 12 yrs+ ago has a foam core like the salesguy said! That poor, flat lump of cotton has been lugged across three (four?) state lines and sentenced to death by a 100 sippies filled with milk. But it is still actually in pretty ok shape -- thank you not-so-cheap-ass futon cover! It is much like the picture to the right -- no, wait, it is exactly like the picture to the right.
So, anyway, I've been thinking about the futon's demise and what form it should take--and I gotta make it quick because we're going to have a cookout soon and people will be tripping over it, in its current unused state in the middle of our living room, hog-tied with twine. We've all seen the proverbial dead futon, lying by the trashcans, getting rained on for a fortnight or two, waiting for the trashman to throw it in the dump. I just can't bring myself to do it -- it's just a big hunk of reusable cotton batting, right?
You will not believe how little there is to Google about recycling futons, except in the sense of donating your flat-ass, old mattress to a homeless shelter. But, I did run across a curious article on Asahi.com (which I'm thinking is a website to help Japanese people with their English) that talks about how, since WWII, Japanese people have been throwing out their futons when, traditionally, they sent them to futon refurbishers. Lately, there have been efforts on the part of futon shop owners to re-introduce the kids to the concept of working to keep the futon through fluffing it up or mending it rather than tossing it in the trash heap where, says the article, "More than half a million are chucked every year in Tokyo alone." In addition to giving workshops on the benefits of refurbishing your futon, there have also been public events to recycle futon stuffing for making things like cushions. Fascinating!
You can be darn sure that, until the economic holocaust, American futon dealers will not be having no workshops on how to refurbish your flat ol' mattress. I think I'll make some throw pillows. Really, really big throw pillows.

And, now, your moment of Haiku.

Update: After fretting about the futon in the middle of our living room and realizing there wasn't a chance in heck that I was going to get around to making anything out of it, the old man carted it off to Goodwill where it was gladly accepted. It really wasn't that stained and still had some life to it, I guess. It's good to know that some thrift stores will take old futons.
Posted by Mistressmybae at 12:30 PM 4 comments:

I got this tip from my friend "B." about this really cool cultural phenomenon in Japan that deserves closer inspection. No, it's not Dance Dance Revolution. There is a symbiotic relationship between the urban denizens of Japan and their rural neighbors that centers around the concept of getting really, really fresh produce to their tables every day. They even have a phrase for it--"chisan-chishou"--which means "grow locally, consume locally." For years I've heard this mantra from vegetarians, the idea that you should eat the foods that come from the soil in your area, that it's better for your overall health. From the few positive experiences I've had growing my own vegetables they always taste so much better than what you get in the supermarket. I've read about the apocryphal $50 cantaloupe in sites that talk about chisan-chishou, but that's the blue-ribbon loupe that you give to the boss as a gift. Man, those wacky Japanese and their weird concepts of symmetry and aesthetic beauty -- oh, yeah, and damn fine, fresh produce!

Here is a great article from LiveScience.com on the subject.

Posted by Mistressmybae at 7:50 PM No comments:

It totally worked! Our small part of the world is host to a large state university with an equally large homecoming parade, so we put the ridealong on my bike and the trailer (with our lawn chairs and snacks) on the old man's bike, and went downtown to watch. DJ put on his new helmet, elbow pads, and knee pads, and climbed on the ridealong like it was no big deal. It was slow going -- I have to face the fact that the ridealong was not made for training wheels, and we're going to have file down the locking piece (that fits into the groove where the back wheel goes) because it is rubbing up against the hub and slowing the pedaling down. Other than that, the training wheels stayed in place, they were bouncy and very stable, and DJ had a blast riding along with mom and dad. It has been so worth the effort to continue working towards not having to take the car to campus every day.
Posted by Mistressmybae at 10:43 AM No comments:

I took those cheap-ass training wheels off and took them back to Target -- oh, yes I did! And my wool-obsessed friend laughed at me the whole way because I confessed that I bought the things in the first place--seeing that they were cheap-looking wheels--because I figured, well, Target's buyer must know what he or she is doing, so... Ugh. I'm such a sheep.

Anyway, then I did my homework and found out that Bell makes a sturdy-looking training wheel (Bell E-Z Training Wheels) that has coils instead of the flat pieces of steel construction that we're used to. Man, I can already tell those things are going to be SOLID. Yay!

The old man had to help me assemble them because the c-ring that holds the wheel in place was a beyotch to put on. I managed to get both wheels on the ridealong before the skeeters got too numerous and we all fled to the inside with Percy, the school rabbit what we are watching for the long weekend.
Posted by Mistressmybae at 4:22 AM No comments: 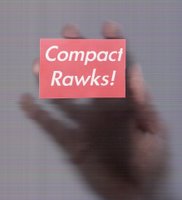 I've been lurking on their newsgroup for about a week now -- these are my peeps, man! I don't know how many identify themselves as part of the year-long compact to not buy anything new (See the original post), but they think and talk about the same crap that I do! Amazing! It's exciting to read 5 pages of musings on cloth diapers, really! I kid you not. If you want in on the lurking (okay, I might post something eventually-- when I'm not blogging, of course!) go to their Yahoo group and apply. I had to do it, and I had to give them a brief description of why I wanted to be part of their Yahoo e-group. I told them I wanted to blog about their asses, but there was a day or two (I honestly had a wait a few days) where I thought I wasn't gonna get to play no reindeer games up in that mess. Go check it out, it's worth connecting with some other people who are just trying to do their part for the cause without blowing a lot of bread and mental mush.
Posted by Mistressmybae at 3:31 PM No comments: