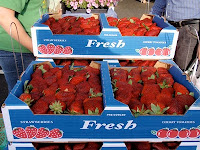 The photos for this post are actually from last week, but the strawberries are still around -- but not for much longer! It was very busy at the market and it was looking so green -- all the farmers had heaps and heaps of greens and reds and it was just lovely. Saw my friend Bren this morning, on a rare visit without her brood; she was getting chickens, just like me! Laughing Chicken Farm has been selling at the market for a few months, now, and I finally got up the courage to actually buy a whole chicken at their stall. Later, I told my mom-in-law that I bought a chicken at the farmers market and she looked momentarily aghast: "A live one?!" she asked. Nope, Laughing Chicken does all the processing, so you get a frozen whole chicken, or parts. I wanted a "Jumbo" chicken (which are the best value at $18) but all they had left were some mediums for $14 -- Bren was buying SEVEN of them; she has a stand-up freezer, though, lucky duck. We should have been running to get to the booth, though, because by the time we got to the chicken table there was already a sizable line. Then, because I was chatting with Bren, I forgot that I had to collar DG for the dinero to buy the darn thing because, as usual, I had neglected to bring sufficient funds to the market. But DG was running her own self ragged around the market so I couldn't find her; Bren very kindly fronted me for the chicken until I got the dough from my connection. Sorry, that sounded like a drug deal -- but the chickens are very tasty, as I understand!

Now for some other views from last week. Just FYI, we're using a new labeling technique that came to DG in a dream or while waiting for the bus or something; using rubb 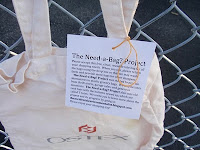 er bands that she has collected from 10 years or so of buying farmers market produce. She has a lot of rubber bands! So, as shown in the photo, we poke a hole in the label, string a rubber band through it, and then tie it to one of the handles or some other tote bag appendage. They kind of fall off after a while, but they don't have to stay on for very long so it's all good (and way cheaper than safety pins). 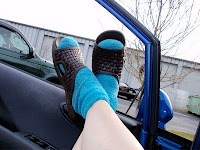 Torino" Okabashi sandals that I got a couple of weeks ago (the lure of Okabashis has been documented in this post). Anyway, as you can see, they are big enough so I can wear warm, fuzzy socks on the few chilly mornings we have left of the spring.

One last thing -- Erika of the sweet-and-tasty-citrus-soon-to-be-pretty-caladiums gave the project a super-duper write-up in her weekly newsletter:


We're pretty fortunate to have two extremely kind individuals who week in and week out provide free tote bags on the market fence for customers to use when they have left their totes at home. DG and Michele created the need-a-bag? program two years ago in an effort to reduce the amount of plastic bags at the market. I don't know if they actually keep tally of the number of bags that they personally buy or sew each week for use at the market, but by my count it is A LOT (very official, huh?) An extension agent from Live Oak visited our market a year ago in an effort to give the Board tips on how to improve customer satisfaction and such. She visits markets on a regular basis, and said she had never seen a volunteer-based program in all of her visits throughout the southeast.
Michele and DG are to be commended for a job well done. The funny thing is, instead of being the ones who are honored, they give trophies to others instead! Check out my 'Jared' from last year's need-a-bag? awards party:

Jealous much? You should be! But really, wouldn't it be nice to thank the brains behind the operation? Consider donating a tote bag to the program by dropping it off at my booth. Better yet, take a moment to visit Michele's blog, The Accidental Environmentalist, OR e-mail a little thank you addressed to DG and Michele to me that I can forward on to them. It isn't easy being green, and these ladies deserve a great big round of applause!

That is so totally awesome, Erika--thank you!

Yep, we tried to do tote tallies early on, but math is hard :( Plus, we have repeats and stuff that sneaks its way onto the fence by anonymous (probably Jean) angel hands, and then there's the stuff Jared finds in a corner of the shed when he does a clean-up. Very hard to keep track of those ephemeral tote bags.
Posted by Unknown at 10:06 PM 1 comment: Links to this post 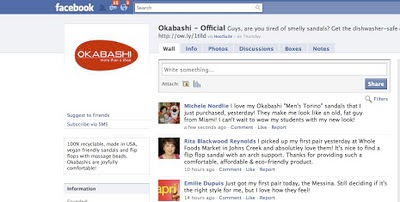 Look! I just became a fan of Okabashi footwear, on Facebook! And I posted the comment you see to the left:

I love my Okabashi "Men's Torino" sandals that I just purchased, yesterday! They make me look like an old, fat guy from Miami! I can't wait to wow my students with my new look!

The comma splice was intentional (this time). With my usual spring attire for Gainesville (Bermuda shorts, athletic socks and baggy Dollar Store t-shirt) I really do look like an old, fat guy from Miami! I believe this has been my intention all along.

Back to Okabashi. My beloved faux-Birkenstock Pali sandals finally broke down after 4+ summers of constant service, and I fretted about the future of my feet for this upcoming summer. I considered getting a new pair of Palis from the Internet, but most Internet people want to charge 17-dollars for a pair of the ones I have now - SEVENTEEN DOLLARS! That's without shipping, and way too much for a cheap pair of plastic sandals. So, the other day I broke down and bought a pair of Okabashis at the neighborhood Walgreens for 10-dollars. The thing that sold me on them was not the fact that they are on Facebook and Twitter (although I find that fact immanently hilarious), but that they are:


They're made in Georgia, of all places. I thought "Okabashi" meant they were some New Age Japanese construction, but this is not the case.

About the recycling: Even with Gainesville's new recycling privileges (type 1-7), Okabashi will let you send your shoes back to Buford, Georgia for actual recycling into new footwear. You have to put them through the dishwasher first -- not having a dishwasher, I wonder if my washing machine would be enough? Yes, checking on the recycling page for Okabashis, apparently you can! If they pass muster, they grind up your old Okabashis and make them into new Okabashis. The circle of shoe life writ large, man! According to their website, Okabashis can contain up to 85% recycled materials and still be durable.

So far, so good with the Okabashis. I've been wearing them around the house this evening (I'm still recovering from a massive head cold so I've been out of commission most of the week) while I catch up on dishes/laundry. The real test will be when I wear them to campus on Monday and put them through the rigours of graduate teaching assistant life.

To recap: Okabashis are my new shoe of choice because they are made in the USA, so I support American industry and not sweathshops overseas, they are cheap yet they can contain recycled materials and be recycled themselves. Win!
Posted by Unknown at 7:39 PM 3 comments: Links to this post