I squeaked with pleasure this morning when I went to the workshop to obsessively check on the kombucha; it was happily floating on the surface of the jar full of sweet tea, swirling in its blobby membranous slime.  YAY!
Posted by Mistressmybae at 1:15 PM 5 comments:

Just noticed that 40 folks are following AE, something that I never thought I'd see for this blog!  I am humbled that people reading AE consider it worthy of their further consideration and show support by adding their avs to the Eco-Peeps list.  The AE is four years old and this has been an amazing way to share my efforts to help in the efforts we all struggle with to live more lightly on this earth.

Thank  you, everyone!
Posted by Mistressmybae at 1:09 PM No comments:

I think I killed the kombucha.

It's been about half a week and the fungus kombucha blob is just lying listlessly on the bottom of the sweet tea.  Here's why I think I killed it:  When I was trying to get it out of the bottle to put into the pickle jar I accidentally peeled off the slimy goo that forms a protective membrane around the fungus.  DD assures me that this won't kill it, but my spidey senses were tingling when that happened so I'm not so sure.
Posted by Mistressmybae at 9:41 PM No comments:

Kombucha! (and also kind of about ginger beer)

I had been talking to DD (my abbreviated secret name for Dave, friend, landscaper, bike mechanic, patriot) over the summer about kombucha - he's a kombucha aficionado - like, they have a magazine called Kombucha Konnoisseur, and he's regularly the cover guy - that's how into kombucha he is.  Anyways, so we were talking about the prospect of culturing kombucha, since I am all into wild fermented beverages these days, and thought I might like to try brewing kombucha, but wasn't sure how to procure the starter fungus.  So Dave shows up the other day, to help the old man with the yard, with a kombucha culture and, later on, instructions and an old glass pickle jar.  Right now I am soaking the jar and boiling some water to make the tea, admiring the instructions for their artistic beauty - like, if The Enchanted Broccoli Forest had been illustrated by a dude.

So, I'm going to make some kombucha, now - it doesn't seem like it will be as labor intensive as the ginger beer and I'll see if I can get the old man or DJ to take some photos of production process.

Oh yeah, I was going to say that I had some more of the ginger beer last night, and it was a lot fizzier - there was the characteristic "pop" when I took of the canning jar lid.  It's a light fizz, nothing fancy, still very refreshing!
Posted by Mistressmybae at 11:12 AM No comments: 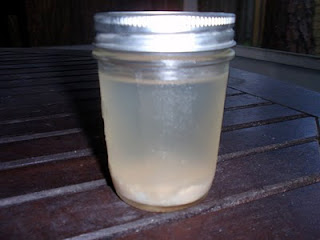 So, I ended up making a second batch, just because the first batch seemed so strange and such a seeming anomaly.  With this second batch I was a little more controlled; taking the old man's suggestions to heart, I took notes as I was making it.  My math, however, is severely limited as I learned when I tallied up the ounces I had actually bottled versus the recipe; the recipe (which, as I have stated earlier, comes from the book, Wild Fermentation) calls for adding enough water to make a gallon.  I had ended up making about 194 ounces in total, so I feared that it would be a lot weaker.


Overall look of the beer:  As you can see from the photo (which is ridiculously unfocused and fuzzy because I took this out of the refridge) there is a lot less sedimentation than the first batch.  This may be partly from the watering-down of the final mixture.

Taste and consistency:  No fizz!  This may be because I bottled the last bits in these small 6-ounce fruit jars I had in the cupboard and, if I remember correctly, when I bottled some in one of these jars the last time there was no fizz in that one, either.

The taste is a little sweeter -- I put the full sugar amount (1.5 cups) that the recipe calls for -- but is still pretty non-sweet in comparison to some of the commercial ginger beers you can buy.  It is still very gingery, however.

I couldn't believe that the batch was not fizzy, so I just got one of the 12-ounce jars and opened that one.  No "pop" when taking off the lid; when I poured some into an empty jar there was no head formation, but there is definitely some carbonation rising from the bottom and on the sides of the glass.  It also tastes carbonated, but it's hard to discern the carbonation away from the intense ginger taste.

Conclusion:  I'm going to calls this batch a bitter-sweet success.  Still tastes great and is very refreshing.  I'm getting used to intense flavor.  I'll share some with Dave and his friend but I'll drink up the rest and then make another batch!
Posted by Mistressmybae at 7:08 PM No comments:

Super Duper Summer Update: Getting back on the wagon

It's almost the end of summer and thought I'd do a final summer-ish post, to update on my various projects and activities before the real onslaught of seminar work/teaching takes over my life for a few months.
In a previous post I mentioned that I was buying food from my friend Bren's food-buying club she formed recently.  She had a blog for awhile about Gainesville food and household deals around town, and that had a decent following; the woman knows her frugal living.  This new venture is through a distributor where she buys organic produce and food stuffs and sells them for next-to-cost to a small group of families (there's a small gas charge tacked on for hauling the food over from the distributorship).

I never really jumped on the organic produce bandwagon; even though larger, more mainstream grocery venues like Publix have made organics more accessible, it's still way too expensive for me.  Bren's food-buying club actually made me take a second look, however.  The food was reasonably priced -- higher than buying non-organic, but still cheaper than buying organic from the store.  And it got me to try buying organic, grass-fed beef and organic cold cuts.  I've had to back away from buying through the food club, unfortunately; my decision not to teach over the summer put us in financial straits by the end, and we're just now recovering.  Ultimately, however, I think it is a good deal and it has been very instructive to compare freshness and taste of organic vs. non-organic items.

Planted a garden this summer and I'm sorely disappointed that I didn't get any pictures of the garden; planted tomatoes, eggplant, and  basil.  It's about tapped and I should follow my other front-yard gardening neighbors and pull up the garden and let it winter over.  We added another raised bed but ended up not doing anything with it.

One result of adding the other bed was that we had to pull up the compost bin; I had slacked off on the composting before pulling it up, but now I'm really not composting and I've got to figure out another place for the bin.  Perhaps it'll go in the backyard this time, not sure.

I decided to give baking soda and cider vinegar for my hair another try.  I've been doing it diligently for a few weeks now; the first couple of weeks my hair freaked out like the last time but it seems to calmed down, now.  My association with shampoo had gone back to that dark place where I was using shampoo and conditioner; you know conditioner can't be good for the water supply, much less shampoo.

Anyway, the last thing I wanted to update on (and of course I'm sticking this at the end of the post!) is that I'm stepping back from the Need-a-Bag? project as my final year in the masters program promises to be even crazier than the first.  I miss the farmer's market but I also like having the extra time in the mornings to cook breakfast and spend time with the fams before I have to sit down to study.  Erika of the sweet-and-tasty citrus is picking up the slack, though, and hopefully will be able to help implement some of the ideas we came up with at the last banquet.
Posted by Mistressmybae at 8:43 PM No comments: