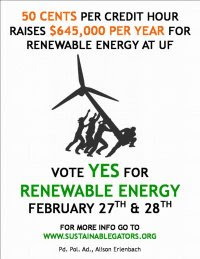 I go to school and work in a large state university. Recently, a bunch of idealistic student banded together to form a sustainability group for our campus. Very much wanting to support them, I (literally) bought the t-shirt (organic American Apparel cotton, by the way--very soft!) and joined the facebook group asking me to vote "yes" for renewable energy during the student elections in 2 weeks. Yes, I have a facebook profile with 2 friends, okay? Anyway, For 50-cents per credit hour the campus can raise 645k per year to buy energy from "green" sources or buy the technology to create its own power.

Now, I'm not saying this is not a good idea. I just think that if we are really, truly going to get serious about conservation and making sacrifices for the sake of the planet, I think we need to start thinking a little more off the grid, as it were. We need to start thinking hard about the possibility of voluntary or prescribed blackouts.

Here's a link to an email call to action asking people to voluntarily turn off their electricity the first day of summer. In 2001. So, almost 6 years later, I'm thinking "I wonder if I can get everyone on my street to do a voluntary blackout for one night?" My street is pretty diverse and the range of answers would go from "you bet" to "you crazy?"

In 2006 the City of Waterloo posted a news release that hailed their own voluntary blackout in August a success.

What would a prescribed blackout look like? When would it take place and who would be exempted? We really need to think these issues through. People might freak and claim fascism is alive and afoot in the states but it's going to happen so we should get used to the idea. And if it doesn't happen on a voluntary basis it's going to be forced on us.
Posted by Unknown at 11:23 AM No comments: Links to this post