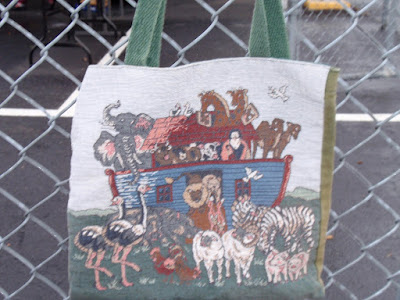 Here is a bag that lasted, like, 5 seconds on the fence because...it has Noah's Ark on it! How could you not want this bag?! This is actually from last year. Geez, where has the time gone?

The market was bustling today, lots of lettuce and onions and some carrots and not so many strawberries. DG managed to snag me a box of strawberries because we had gotten to the market late and I hung bags while she went in to shop (my fault, I've been dawdling like a fiend of late). My family gobbled them up after I got back -- seems the freezes have not been kind to strawberries, among other crops, this year.

And now, the news -- Celebration! We've finally nailed down a date and time for our Need-a-Bag? Project Second Anniversary Banquet. It will be at Civilization this year which, I found out, is a co-op owned venture. It makes me want to frequent them even more than I have, which is none. This will be a time to thank the people who have helped Need-a-Bag? continue through two years of service to the Hwy 441 Saturday farmers market.

I was hanging bags this morning and a gentleman walked up and said, "are these for frees?" Haha, no, they're for free! Cute.

DG and I talked the other day about doing something crazy like apply for a grant, and then we realized we'd have to do something crazy like become acknowledged as a non-profit or something. That's too hard! I thought we should become a non-profit and then get the project signed up for the Disney volunteer service=free ticket to the parks thing, but again -- TOO HARD! I don't think I've emphasized enough how truly lazy we are, and so doing something like being officially recognized as a 501 c.3 or whatever would be disastrous to our continued willingness to do this project.
Posted by Mistressmybae at 11:11 PM 2 comments: