WikiHow How to of the Day: How to Green Your Clothes 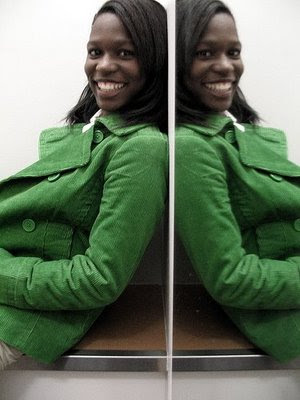 I love WikiHow, and I have a feed for the WikiHow of the day on my Google Page. Thought I'd share today's, 8 Ways to Green Your Wardrobe, because it was actually on the mark. Take a look at it -- the first way, "Be Fussy" I felt was especially important. So often, I find myself in Wal-Mart (i know) or Target (double i know) and think, "I need new tops/skirts/leggings for work," and begin to look seriously at the clearance racks. And at Wal-Mart that's pretty scary stuff. But then I pull back and think, "okay, where is this stuff coming from," look at the tag and realize that the fact that a shirt costs $5 and comes from Pakistan means that someone suffered along the way to bring this shirt to a Wal-Mart in the southeast United States.

Following the First Way of "8 Ways to Green Your Wardrobe" will make you exceedingly green, because you will not impulsively by a $5 shirt made by a 12 year-old in a third-world nation.

Got the photo, "Shauna in Green," by Logan Cody, via WikiHow.
Posted by Unknown at 7:43 PM No comments: Links to this post

That post I did on my bowing robes was kind of wacky with all the photos, so I thought I'd do a separate post on the results, instead of adding to the original piece. The stains, left on for God knows how long, came out beautifully. I kind of wished I had put a safety pin or other demarcation so I could photograph the "after," but I didn't, so you'll have to trust me. I think the robe is made from a poly-cotton, so that might explain its great success.
Posted by Unknown at 11:09 PM 4 comments: Links to this post 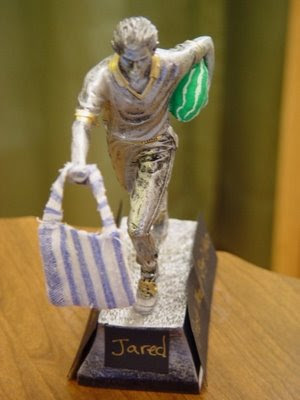 Some peoples have the "Oscars," and we at the Need-a-Bag? Project have the "Jareds." Named after the intrepid 441 Farmers Market manager, we gave out 4 Jareds to the wonderful folks who make the Need-a-Bag? Project a reality every week at our first annual Need-a-Bag? Project Banquet/Pizza party. We all met up at the Original Pizza Palace on Saturday night and had a great evening chatting and eating some of the awesome fare. DG made the awards from reclaimed statues she found at the Waldo Flea Market -- you'll notice the stylin' tote bag and the farmers market watermelon safely tucked under one arm. It kind of looks like a typical Saturday morning farmer's market shopper, trying to breach the crowds to make that touchdown at the rutabaga stand. One of the best things (besides everyone showing up and having a good time) was that Jean and Stace both came with more tote bag donations! That's Need-a-Bag? Project spirit for you! Thanks to everyone who has continued to make the Need-a-Bag? Project a worthwhile venture!

Photo by Need-a-Bag? Project Associate, Stace.
Posted by Unknown at 10:48 PM No comments: Links to this post

Posted by Unknown at 6:57 AM No comments: Links to this post I've been using Charlie's Soap for a few months now and so far it has worked out great. The clothes are just as clean as with a regular detergent and they come out of the dryer softer.

The thing I want to write about, however, is the magical properties of Charlie's Soap. I had a skirt that had a leakage problem (misplacement of the Diva Cup, if you know what I mean). Normally, I would have pre-soaked it and scrubbed whatever soap I had around and thrown it in with the rest of the wash. Here's the difference: This skirt was not only "dry clean only" but I had left the stain sit on it for a looong time. So, I decided to experiment, since the skirt was probably a goner with that stain, and used a pre-treat with Charlie's Soap.

It's not really a pre-treat type of laundry soap, I've found, but only because it does not react like Tide or Dawn, the two pre-treaters I've used in the past which take out just about anything. The Charlie's Soap is very grainy and doesn't suds up (I guess that's part of why it's safe for rivers and streams) so it doesn't seem like it's doing anything when you rub it in.

Charlie's Soap also does a really weird thing: it heats up when rubbed with 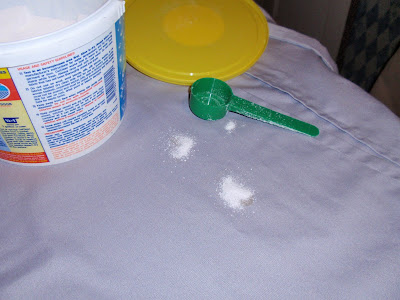 water. It was really freaky; I was using my fingers to rub it in after wetting the stain with water, and could feel it get really hot. Oh, also, I don't recommend you use fingers to rub Charlie's Soap into anything -- it kinda stings.

But, after putting the "dry-clean only" skirt through the wash I hung it up to air-dry and the stain was completely gone. So I decided to try another experiment -- this time I took pictures.

Above is the bowing robe I left at the Zen center for, like, five years and brought home to wash. As you can see, there are some unidentified stains on it -- that's what I get for leaving it. This time I used a wet washcloth to rub in the Charlie's Soap. I just use a little bit on each of the stains and rub it in. Eventually I had to put my fingers on it somewhat, and the same stinging occurred. But I got the soap worked in fairly well and dumped the robe in with the rest of the wash with the regular one tablespoon of Charlie's Soap. 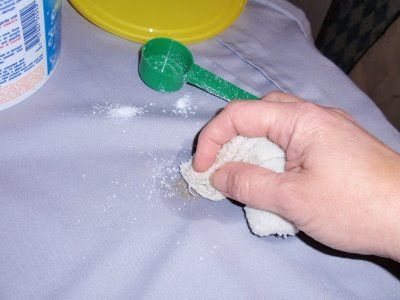 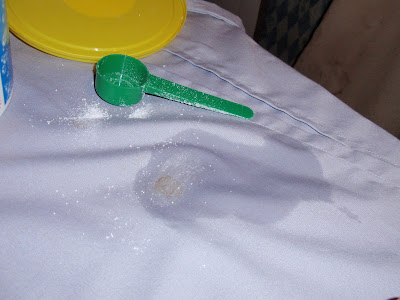 Thought I'd do a blanket update of all the stuff I've been doing:

Update on compost: I just dumped some scraps in the bin and when I began turning it over with the shovel discovered a big, fat earthworm! Yay! I didn't kill my compost.

Update on weaning from deodorants: I don't use the Old Spice as much as I used to, but there are still times when I am completely insecure about the status of my body odor that I do still apply it. I'm pretty much not using anything, now. I think this has been a mixed-bag. Sometimes I get through the day just fine, and other times I really do stink by the end. I still mix up corn starch with a little fragrance oil and that helps wick up the moisture, and I also use a moisturizer stick I made with lavender and other odor-fighting scents to cover up the stink.

Update on using cloth handkerchiefs: This has been going pretty well, although I did break down and buy a box of GreenWise recycled paper tissues when DJ had a cold. I've been reaching for them instead of getting up to get a cloth one, and I'm just not going to buy anymore paper tissues after this box is gone. That'll show me.
Posted by Unknown at 11:12 AM 2 comments: Links to this post

Compost Kid and other names you shouldn't give your children

The Compost Kid is featured prominently on the new compost bucket I got from Waste Watchers. What an unfortunate name for a superhero, wouldn't you agree? And no wonder he is pretty much the geekiest of the Waste Watcher gang -- if your name was "Compost Kid" and you had a banana peel on your super

hero suit, you'd be pretty goofy looking too, I bet. He probably doesn't even want to do it; Big Blue probably threatens to beat him up if he leaves the Waste Watchers.

Who watches the Waste Men, indeed.
Posted by Unknown at 10:56 AM No comments: Links to this post