I promise I will do a Need-a-Bag? project update but first I want to report that the ginger bug is bugging!  It's bubbling and I'm going to bottle some ginger beer today!  Right now I'm boiling some Kombucha bottles that my friend and bike mechanic gave me; I'm also going to use mason jars to see which one is better for bottling.
Posted by Mistressmybae at 1:41 PM No comments:

Okay, after the first two days, the mess I have out in the workshop was bubbling like crazy but I still didn't have the bottles ready, so I fed it with two more teaspoons each of sugar and ginger.  Now, nothing.  I'm wondering if shaking it was the problem, or possibly using the grated ginger from the fridge; the ginger was straight from the cold, and I'm wondering if that retarded or killed the flora.  So, I'm going to feed it again -- I should add that when I say "nothing" I mean that although there are slight bubbles around the edges, it wasn't as vigorous as the first time I checked and before I fed it.  This time I'm going to let the ginger get to the temperature of the workshop, leaving it in a covered bowl for a few hours next to the ginger bug.  And I'll try to restrain myself from shaking it.
Posted by Mistressmybae at 11:04 AM No comments:

Today was the first day I checked the ginger bug and, by gum, it was already bubbling!  I wasn't prepared for that bubbling because I do not have the bottles to bottle the ginger beer, yet.  So, I fed it some more sugar and ginger and put it back in the workshop.
Posted by Mistressmybae at 9:47 AM No comments:

I tried making beer once and it was an abysmal failure -- even though it was a Mr. Beer kit I picked up at a garage sale, I just could not get it going.  Maybe it was that the ingredients were old.  Also, trying to make beer with your 7 year-old son may SEEM like a fun, family activity, but it is not.

So, now I'm going to try ginger beer.  I have a thing for ginger beer -- it's great on really hot days (like now) and I like my ginger beer more on the gingery side, rather than the sweet side.  So when I was hanging at Bren's the other day (for the food coop, which I'll get to in another post), I saw this book on different things you can make from fermented things.  I decided to try my hand at ginger beer.

I googled "ginger bug" the starter you make for ginger beer (I've one started in the workshop, where it is warm), and found this great eco blog, Sustainableeats, that talks about the process for ginger bugs -- I think this person is making rhubarb soda but I didn't really read it all the way through).
Posted by Mistressmybae at 12:18 PM No comments: 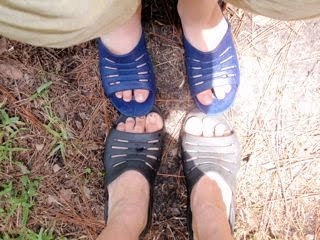 The Okabashis came back sooner than expected; they also sent the pair I wanted in exchange, which I was kind of surprised about (see this post about returning the defective pair).  I decided to get another pair of the EuroSport sandals that I have worn daily for about two months with no problems whatsoever, and chose a pair in navy to fit DJ.  He says he likes them because "they have the little bumps that massage your feet." So now we have matching sandals and he does not seem at all perturbed by this.  I'll give it another year.
Posted by Mistressmybae at 8:09 PM No comments:

Jonesing for my JanSport 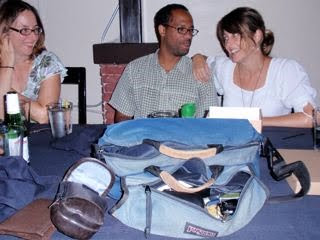 Here's a picture of my bag, right before sending it back to where ever hippies come from (Washington state, I think), and -- oh, yeah, who the hell put those people in my shot?!  That's right, I was at a celebratory dinner recently at The Warehouse (see this post for my original impressions) for the person on the right, and decided to take a picture of my bag and those three people thought I was taking a picture of them.  Haha, they do not realize how obsessed I am with this stupid bag.  I MISS IT SO MUCH WAHHH!

UPDATE:  Haha, I am such a crybaby!  The same day I posted this I also FORGOT to check the mail, and when I checked it the next day, the bag was tucked in awaiting my return!  It is so wonderful to have the back bag from the kind hippies at JanSport -- once again they have come through, not only replacing the zipper I had a problem with, but also the main compartment zipper, as well as putting on new pulls.  All for the price of priority postage.  You gotta love this company.
Posted by Mistressmybae at 7:55 PM No comments:

Jansport makes me officially a hippie from the 70's

I sent back my beloved JanSport satchel to JanSport so they could fix the front compartment zipper.  I've lugged this thing around for 15 years but I have yet to find (or make) anything that could replace it (here is a post from 2007 where I have the same complaint).  So back it goes.  JanSport just sent me this postcard: 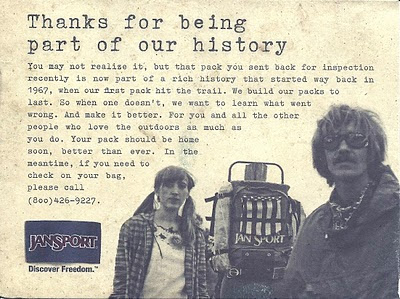 I like that they UNDERSTAND my loss at not having my trusty JanSport.  They are also a pack of hippies.  They feel so much.
Posted by Mistressmybae at 8:26 AM No comments: