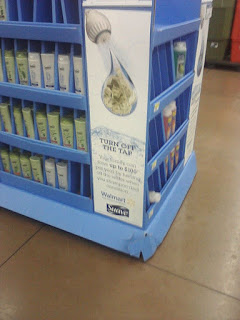 I posted this on Facebook over the weekend, from a recent shopping trip to Walmart; Suave has a new ad campaign for their line of natural shampoo and conditioners and I found it interesting that they use water conservation as a way to market their products.  The sign says, "Turn off the tap: Your family can save up to $100 dollars per year by turning off the water when you shampoo and condition."  So, it's an appeal to economic rather than ecologic savings, but it's still kind of fascinating to think that this may be a new marketing meme in a really bad economy.  Put on your Jimmy Carter cardigan and turn down the thermostat, folks, it's 1977 all over again.

I guess it's a start and I really shouldn't complain, even though I sorely want to.  I will say this, however; if people are impressed about saving 100-dollars in a year by turning off the tap in between rinses of your shampoo regimen, think about how you could triple or quadruple those savings by not showering every single day.


Thanks to Osha Gray Davidson for his Forbes digression from electric vehicles to explain the significance of the Jimmy Carter cardigan for the youngs.
Posted by Unknown at 12:10 PM 4 comments: Links to this post

Is there an ethical engagement ring? 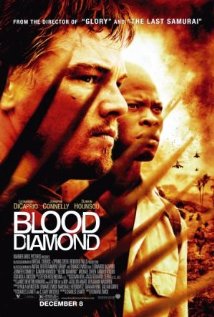 I was just reading a Mother Jones Econundrum article by Kate Sheppard entitled, "How Do I Buy an Ethical Engagement Ring?"  These types of articles make me a little meshuggeneh because they always gloss over the most obvious fixes for this type of "problem," if you can really call it that; the main solution is to just not buy anything.

Sheppard talks about how buying an engagement ring problematizes her role as a feminist as well as a human rights activist and environmentalist.  I'm sure you've seen at least the trailer for Blood Diamond which in its Hollywood way exposes the human cost of mining precious stones in banana republics, or are at least aware of the issues involved in buying precious stones like diamonds, and are also called "conflict diamonds" because they help fund the bloody wars that rage through Africa.  Here's a website for Global Witness, one of the first organizations to bring this issue to the fore, and which Ms. Sheppard references in her article.  But alternative stones and ethical diamond merchants are not at issue here at all.

Do you need an engagement ring at all?  I'm kind of a hypocrite here, because I have a wedding ring but we never got around to the engagement ring, and so maybe I'm just jealous, but there are other options; I should add that Ms. Sheppard points these out towards the end of her article, like finding vintage or antique rings which would be the way I would go and I felt should have been more prominently suggested.  This brings me to the biggest reason why I'm making a half-hearted attempt to criticize this article; the utter excess that it continues to perpetrate in the engagement ritual.

Ms. Sheppard herself feels conflicted by the whole thing and rightly so; being a modern, new millenium-woman she should feel this twinge of unease at the prospect of telling her readers that it's okay to have these conflicts but still go ahead and continue an outdated form of ownership identification.  And more than just the ritual itself, it's the money spent behind the whole idea that makes it just so excessive and unnecessary.  This is a really, really bad economy and to post articles on something that most Americans cannot even think about right now is really a disservice to Mother Jones hippies like myself, and young people who look to lefty rags like MJ to help them make informed decisions about the political world around them.
Posted by Unknown at 8:03 AM 3 comments: Links to this post

Kickin' it with the Krishnas at the Kickstand This Wednesday 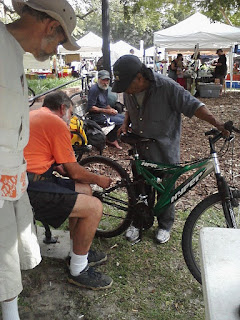 You can follow The Kickstand updates here or follow the group on BookFace - I've been doing the updates for TKS for about a month, now, and I'm still feeling my way around the WordPress interface (it's not as lazy as Blogger).

This was the week Occupy Gainesville got rolling but from our vantage point on the edge of the plaza all we could see were people making signs on the bandstand and playing with frisbees and hula hoops.  If you've never come down to the Union Street Farmers Market on a Wednesday, it is quite an experience and I'm there with The Kickstand, so there's that.

The Krishnas were in full voice and fine form; last week I my head was so full of "Hare Hare" that I had to cleanse my mental palate with this George Harrison video: 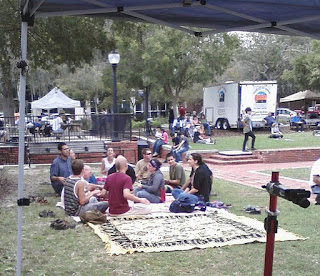 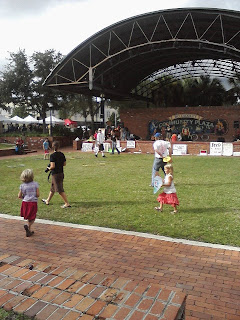 The fact that they are right next to our booth is both fun and annoying at the same time, but I do like the smell of incense in that closet-churchy kind of way.

Alex and Chandler are the two main mechanics who help folks learn how to fix their bikes; at least that's the plan, but sometimes they just leave the bikes and go off somewhere for a little while. Either way, the bikes get fixed and people have greater control over the transportation options in town. Alex is great about teaching bike mechanics, though, so I've been learning a lot about fixing flats and especially about fixing brake cables because that seems to be a problem with a lot of bikes (mine included!).  The thing that's most admirable about these two (besides the fact that they schlep out to the farmers market every week) is that they're like the McGuivers of the bicycle repair world; they can fix just about anything from disparate bits of debris lying around.  Twice since I've been volunteering there we've managed to not get our tools and bike parts at the farmers market, and these guys have both times done so much with just a few tools - needle nose plyers are key, I've found.

So, anyway, that's my rant about The Kickstand and how much I love volunteering with these people!
Posted by Unknown at 6:05 PM 3 comments: Links to this post 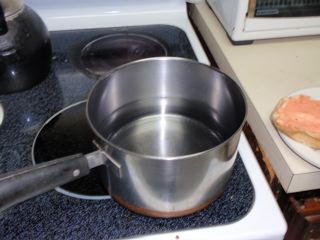 This is the kind of stuff I get up to when the Old Man and DJ aren't around - I found out all this terrifying stuff about the Diva Cup.  No, it's not a horrible, space-age horror - I still love my Diva Cup after using it for...5 years?  I don't know, and I'm too lazy to go back into the blog archives to find out, so I'm just going to say 5 years!  Anyway, did you know that you're not supposed to wash your Diva Cup with castile or any other oil-based soap?  Yep!  Did you also know that you're not supposed to let the holes in the top get clogged with menstrual goo?  Yup!  Finally, did you know that you should boil your Diva Cup every so often but not until the water burns out of the pan and your Diva Cup is but a cinder?  That's right!  I learned all of this by clicking a few times and found the Diva Cup FAQ that told me all this important stuff that I've never read before but now I know about.  I love the last FAQ that says, "I boiled my Diva Cup for too long and burnt it - should I buy a new one?"  What do YOU THINK, you moron?!  People actually ask this crap.  (haha, I really have no room to talk, just saying).

Okay, I'm done venting.  And I did wash the Diva Cup with castile soap and let the holes get all gooed up.  BUT, I also just boiled it for 5 minutes - the stuff is hospital-grade silicon, it will probably survive through the environmental holocaust of many tsunamis and hurricanes (oh wait, they're the same thing!).

And that's why I wait until the Old man and DJ are out of the house, so I can do stuff they'll never know about, like boiling my Diva Cup in one of our cooking pots (Hope the Old Man doesn't read this, lol, but he probable will).  It's not like he hasn't seen me boiling much worse in probably the same pot.
Posted by Unknown at 6:00 PM 1 comment: Links to this post

The Kickstand this Wednesday

Hi, I'm swamped, as usual, but wanted to post quickly and link to the organization I've been volunteering with for the past month, The Kickstand.  They're a great group and I really love working with them!  Here are some recent photos, too - the first photo of my new volunteer-mate Chandler, fixing a flat tire (also in the photo, taken by the other great mechanic, Alex, is The Kickstand's fabulous new sign, also done by Alex); the second photo is of my new sustainapeep, Mike, showing off his electricity-generating bike at last Friday's United Downtown in Gainesville. 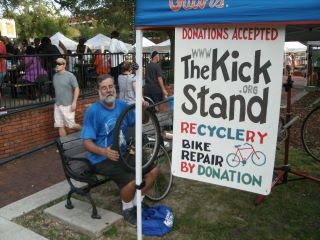 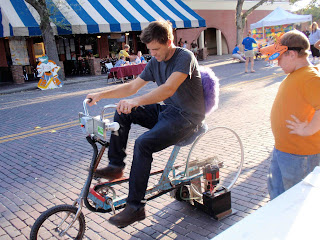 Posted by Unknown at 11:58 AM No comments: Links to this post